The coolest thing about understanding calorie density principles is that you can discard all the nonsense you’ve heard about dieting and start over with a clean slate. It’s liberating when you realize the reason America is overweight is because our diet is heavily composed of the most calorie-rich foods on the planet. This is a no-win proposition that guarantees weight gain and the promotion of chronic disease.

A much better—and more sustainable— approach to weight loss is this one: Eat mounds of food while taking in fewer calories and feeling satisfied and full!  (Need help with recipes and support on your journey? Join our free community!)

So, what does calorie-dense mean? Well, when it comes to weight control, the overall amount of calories in a particular food is less important compared to its calorie density, that is, the amount of calories in relation to its weight. For instance, a 3.5-pound melon has just 450 calories, while 3.5 pounds of Swiss cheese has more than 6,000 calories. Because people tend to eat a certain volume of food every day, regardless of calories, one of the primary reasons people gain weight is by eating too many high calorie-dense foods such as dairy, meat, and processed junk foods, and not enough low calorie-dense fruits, vegetables, beans, and intact whole grains such as brown rice.   This handy chart gives you a clear visual on what we’re talking about. 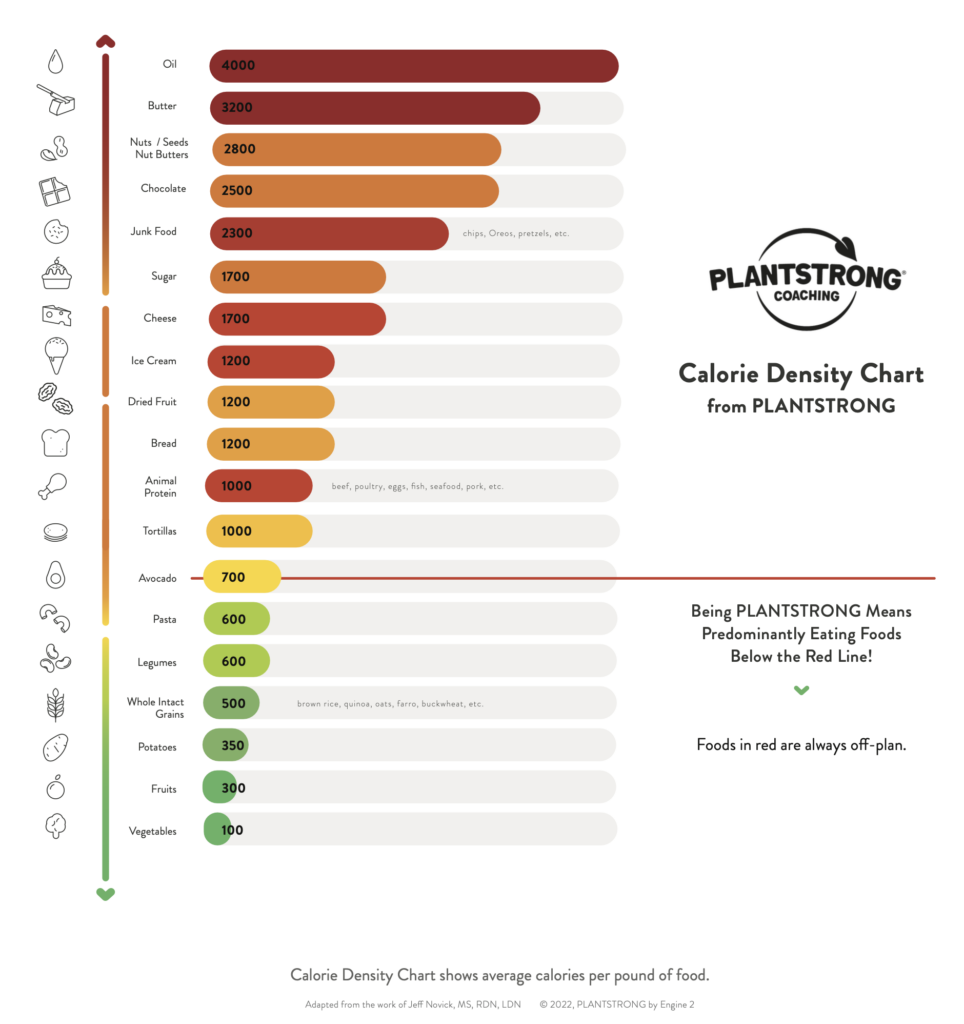 By predominantly eating foods to the left of the red line, you’ll be consuming meals that will fill you up without derailing your progress.

Here are some other reasons to be mindful of calorie density:

Liquid Calories. Drinking your calories can be the equivalent of sipping a Big Mac with a straw and not feeling any less hungry. Liquid calories, which provide no sense of satiety, are a major reason why diets inevitably fail. A soda here, a smoothie there, a glass of wine later, and all of a sudden you’ve taken in half your daily calories, you’re more hungry than ever, and you haven’t even touched your food yet!

High-Fat Foods. Fat contains the most calories (nine) per gram, so the more fat in your food, the more calories it has. It’s as simple as that. Animal products are, of course, high in fat—especially the Darth Vader of fats, saturated fat—so it’s no surprise eating them leads to weight gain. Most plant foods, on the other hand, are naturally low in fat and only contain the essential amounts our body needs to function optimally.

Processed Bread Products. These are some of the worst offenders when it comes to promoting overeating. Carbohydrates from refined, processed grains, such as bagels, bread, and crackers, have roughly three times the caloric density of unrefined, whole-grain foods like rice, oats, and potatoes.  Almost all the satiety-promoting fiber, which is only found in plants, is removed in these products, leaving you with empty, dense calories that won’t fill you up. That’s why you find yourself consuming an entire box of Wheat Thins, then heading back to the pantry for more food!

Imagine taking a bowl and filling it with two cups of grapes. Then take another bowl and drop in just a quarter-cup of raisins. Which would be more filling? The grapes, of course. You don’t need a scale to know that the whole grapes weigh a lot more—and therefore fill you up better—than their dried counterparts. Nevertheless, those two cups of grapes and that quarter-cup of raisins have the exact same amount of calories: one hundred. The nutrition might be the same, but you’re feeling a whole lot more full when you choose the grapes instead of the raisins.

In short, feeling full has nothing to do with the amount of energy in a food. In this particular case, people, size does matter.

So if not calories, what are low-density foods stuffed with to make them so hefty? Water. Remember that at nine calories per gram, fat is the most energy dense, while water has zero calories. The more water bulking up your food, the heavier and more filling it will be. Many fruits and vegetables are more than 85 percent water, which means that at least 85 percent of their volume contains zero calories. Consider the grapes and raisins. A quarter-cup of raisins has the same 100 calories as two cups of grapes—that’s a whopping eight-fold difference in the quantity of food! The only difference is the raisins are dried, while grapes have retained their water.

If you’re trying to lose weight, being mindful of calorie density and adding water-dense PLANTSTRONG foods into your diet can work wonders. Click here for a handy one-pager of our program at-a-glance.

For more information on the principles of calorie density and the seven pillars of living PLANTSTRONG, pick up a copy of Rip’s book, The Engine 2 Seven-Day Rescue Diet. For friendly support, recipes, events and more resources, please join us in our free community.

Why Do I Have to Give Up Cheese? It’s So Hard! 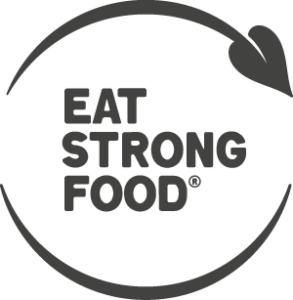