Won’t I Lose My Man Card if I Stop Eating Meat?

For more than a decade, Rip Esselstyn traveled the country sharing the good news about switching to a PLANTSTRONG lifestyle. Men resisted more than women because so much of the masculine construct—the male identity—is tied to meat eating.

“But where will I get my protein?”, they would ask. Let’s tackle that myth right away.

You do not need animal protein to build strong muscle. Don’t believe me? Ask the gorillas and the elephants who eat nothing but plants.

Now, let’s address the canary in the coal mine: erectile dysfunction.

Most men think that if you give up meat and animal protein, you’re suddenly going to lose your “Man Card.” Ironically, by going PLANTSTRONG, you’ll actually be stacking the deck in your favor.

A good erection is all about good blood flow and if your arteries are blocked, the amount of blood flowing through your body is reduced, meaning there isn’t enough to pick you up when you want to get down.

To help you understand why the artery to the penis tends to block up first and foremost, let’s take a look at the diameter of two arteries.

The coronary artery that flows to the heart is about 5 mm wide, or the size of a normal drinking straw.

The artery to the penis is a mere 1mm wide, or the size of a little coffee-stirring straw.

Which one do you think would clog up quicker? Makes you think, doesn’t it, guys?

If you’re ready to give it a try, what should you eat? Watch the video below for a quick tutorial on “What Rip Eats In A Day.”

Want to make the plant-based lifestyle delicious, easy, and convenient? Check out our growing assortment of products in our PLANTSTRONG food line. We ship direct to your door and you can save 10% when you subscribe! 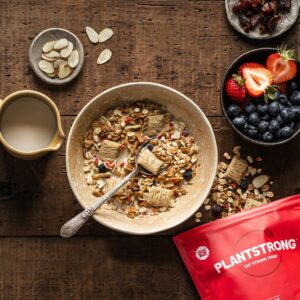 Want to take the PLANTSTRONG Seven-Day Challenge? It’s Free!
Join Us!
This is default text for notification bar
Learn more